Have you ever caught a firefly? I remember countless nights as a child, running through the fields with a mason jar trying to catch fireflies. Watching the jar filled with bugs with glowing bottoms for hours, then releasing them back into the fields only to start all over again. But where have all the fireflies gone? We haven’t seen them in years, are they going extinct?

Where Have All The Fireflies Gone? A forgotten pastime of our youth

The awe and amazement of watching fireflies as they light up the night sky will never grow old. No matter how many times I’ve seen it, I still stop and say ‘oh look’, pause from whatever I’m doing and watch their light-show. Although, somehow, as the years have gone by, the sighting of fireflies has faded along with my memory of them. Where have they gone? Sadly, their populations are endangered by human activities such as habitat loss, light pollution, and pesticides.

What Are Fireflies and Where Do You Find Them?

While people commonly call these amazing creatures fireflies or lightning bugs, they are actually small flying beetles with an abdomen that lights up. There are over 2,000 species of the bioluminescent beetles in the world. With 125 in North America alone, and 19 species found within the Smoky Mountains National Park.

Fireflies can be found in the fields, marshes, mangroves, and forest. However, these natural habitats are being destroyed by human development and fewer habitats remain each day that passes.

Although it takes the lightning bugs one to two years to mature from larvae into adults, the lifespan of an adult is extremely short. Adult fireflies only live for two to three weeks and don’t eat any more meals once they are an adult.

Males attract the female by making a light pattern. This Is how the life cycle is started. The females lay eggs in the summer. The eggs will glow and will take around 28 days to hatch and turn into Larva. the larva shelter in the mud and eventually turn into pupa. The firefly pupa will lay on its back while it grows its legs, eyes, abdomen, antennae and more. Then the pupa will turn into an adult firefly and the whole process is continued again. 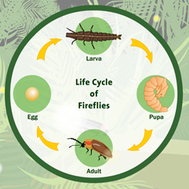 What is Killing Off the Fireflies?

As mentioned above, the firefly larva and pupa live in the ground for several months. Unfortunately, this is where we spray a broad-spectrum of chemicals to destroy harmful insects and weeds. The systemic herbicide 2,4 –D is used to kill broad-leafed weeds in our gardens, yet it’s also toxic to earthworms, a dietary staple for baby fireflies. Fireflies are thus directly and indirectly harmed by overuse of pesticides.

Commercial harvesting, both foreign and domestic, has drastically reduced the firefly population, almost to the state of extinction in some areas. Fireflies are harvested for their light-producing chemicals and their luminous beauty.

Another threat to fireflies is light pollution. Their courtship is based on luminous signals, artificial lights interfere with their ability to find a mate and reproduce. With the growing number of cities across the nation, finding a place that isn’t artificially lit at night is getting harder to come by.

What Can You Do To Help Fireflies?

You may be wondering what you can do to help save this amazing species. I have some tips so you can help preserve this childhood pastime.

Where Can I see Fireflies

I thought that seeing fireflies light up the sky was just a faded memory until we moved from our urban homestead to our smoky mountain homestead. The first night I was outside brushing my teeth in the woods I noticed little flickers of light. I didn’t recognize what I was seeing at first, then suddenly the happy childhood memories of mason jars and glowing fireflies filled my head. I called the whole family outside to enjoy seeing the light show.

As it turns out, we live in one of the few areas in the world that the fireflies gather during a certain time of the year to put in a huge light show called Synchronous Fireflies In The Smoky Mountains.

This spectacular event happens once a year at the end of springs, beginning of June. If you are in the smoky mountain area, this is one must-see event.

Do You Still Have Fireflies Where You Live?